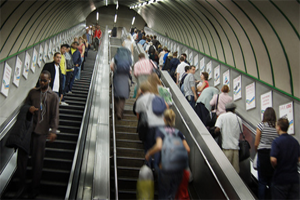 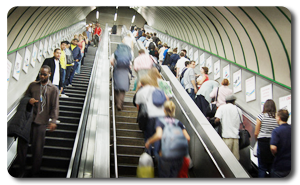 London needs help and only a person trained in psychology can fix this. There are just too many Londoners using their subway (the “tube”) and instead of standing side by side as they go up the escalator, people are doing what they always do – they stand single file on the right of the escalator so that people in a hurry can pass on the left. That’s a fine social norm when there aren’t that many people, but if London transport is going to be usable as the population grows they’re going to have to get people to behave differently.How can we break such a strong norm? It’s not just London’s problem. When you go up the stairs which side do you stand on? The right of course, and you expect the people coming down the stairs to stay to their right. When someone doesn’t follow the norm we can get pretty annoyed.

I also look at whether or not it helps people with dementia to “exercise the brain“. Does it really help to delay the symptoms of dementia if you learn another language?

So what can we do to create a wide scale change in behavior? We have to apply a little social psychology.

…bilingual patients developed symptoms of dementia 4.5 years later than monolinguals..[but]..the positive benefits of being bilingual only really accrued to those who used both languages all the time…Other studies of successful aging suggest that being connonected to one’s community and having plenty of social interaction is also important in forestalling the onset of dementia. – Becoming Fluent

Social Proof, also known as informational social influence, is a psychological phenomenon where people assume the actions of others in an attempt to reflect correct behavior for a given situation. This effect is prominent in ambiguous social situations where people are unable to determine the appropriate mode of behavior, and is driven by the assumption that surrounding people possess more knowledge about the situation. – Wikipedia

Informational Influence: “..the influence of other people that leads us to conform in order to be liked and accepted by them… – Wikipedia

2 Comments on “Ep 255: London Has a Problem and It’s a Job for a Psychologist”