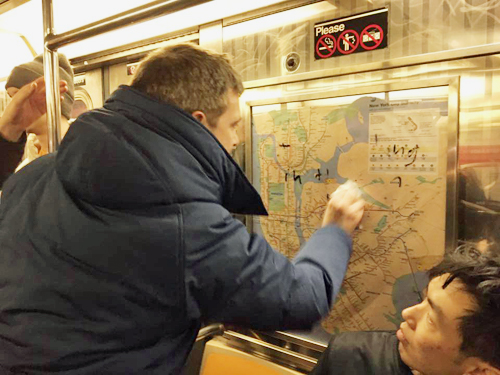 Complete strangers in New York City come together in a simple but moving act: they decide as a group to work together to remove offensive graffiti in a subway car. How did they overcome the social pressures to do nothing? In this episode I show how diffusion of responsibility, Modeling, the Big Five personality types and Social Identity theory were at play in this simple but wonderful few minutes on a subway car.

I got on the subway in Manhattan tonight and found a Swastika on every advertisement and every window. The train was silent as everyone stared at each other, uncomfortable and unsure what to do.
One guy got up and said, “Hand sanitizer gets rid of Sharpie. We need alcohol.” He found some tissues and got to work.
I’ve never seen so many people simultaneously reach into their bags and pockets looking for tissues and Purel. Within about two minutes, all the Nazi symbolism was gone.